My palace in Jannah 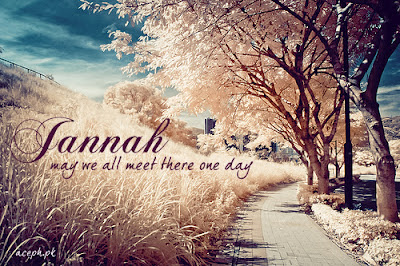 I dream of a beautiful Palace surrounded by chocolate waterfalls. It contains flower-filled gardens and fruit laden orchards, and its beauty shimmers from a very far distance. Its floors contain diamonds and crystals, and its golden walls and doors feel softer to the touch than a rose petal. I dream the palace windows comprise of every gemstone from rubies and emeralds, to sapphires and much more. The white snow falls from above on the elegant fountains sparkling with different colors of light. Inside this beautiful palace, with the chairs and tables made by the daintiest of silk and pearls, each room contains delicacies and every dessert one could ever imagine. The drapes bloom with fragrant roses and jasmine flowers and, outside, one can see the moon, stars and sun whenever so the heart wishes. A palace where I get everything I ever want. I wish I could live in such a lovely palace. I lay in my bed thinking and dreaming until mother called me to help her water the crops in the farm.

My name is Arwah and I am nine years old. I live in a small village in a hut. I lost my father when I was five years old. I miss him very much. Since the death of my father, my mother started working in the farms all day. She does not have much time for me but she makes sure she tells me one important gem from the Qur’an and the Sunnah every day. My mother is amazing. She works hard every day to provide for me. I am very thankful to Allah Subhana Wa Ta’ala for everything He has given me, especially for giving me mother. When my mother comes home, we eat together. We eat breakfast and dinner. Mother said we do not have enough money for lunch. She is currently saving money from her farm job so that by this time next year, I will be able to start attending school Insha Allah. She always makes sure I pray on time and teaches me Qur’an every weekend. She says that prayer is the key to success and asks me to make du’a for her. Mother said, “You can always ask Allah for anything you want.” I ask my Allah for a beautiful palace.

My mother told me a beautiful verse from the Qur’an today:

“We will soon enter those who have Imaan and who carry out good actions into Paradise beneath which rivers flow, where they shall live forever and ever. The promise of Allaah is true. Who can be more truthful in speech than Allaah?” (Surah Nisaa, verse 122)

After a year of my mother working at the farm, I was able to start school. She got me a new uniform and gave me a daisy flower. I felt so excited to make new friends and to learn from my new teacher. However, when I entered the classroom, all the girls made fun of me because I was not wearing shoes. I could not afford shoes and was instead wearing slippers. I was very thankful to Allah for giving me slippers because my neighbors do not even have slippers. From that first day in school, I took a seat all the way in the back of the classroom. No one wanted to sit next to me. One girl in particular, named Sarah, always made fun of me. She would try to make me cry every day. Whenever I would come home, my mother would console me by giving me hope of Paradise. She then told me the great story of Aasiyah (Radi Allahu Anha), a woman with such deep eeman and my role model. Aasiyah was the wife of Fir’own. Her Eeman in Allah thrived under the shadow of someone that said, “I am your Lord, Most High!” When news reached Fir’own of his wife’s Eeman he beat her and commanded his guards to beat her. They took her out in the scalding noon heat, tied her hands and feet and beat her perpetually. Who did she turn to? She turned to Allah! She prayed, “My lord, build for me a home with you in Paradise and save me from Fir’own and his deeds and save me from the transgressive people.” It was narrated that when she said this, the sky opened for her and she saw her home in Paradise. She smiled. The guards watched astonished, she’s being tortured and she smiles? Frustrated, Fir’own commanded a boulder to be brought and dropped on Aasiyah, to crush her to death. But Allah took her soul before the boulder was brought and she became an example for all the believing men and women till the end of time.

[And Allah has set forth an example for those who believe: the wife of Fir’own (Pharaoh) – when she said, “My Lord, Build for me a home with You in Paradise, and save me from Fir’own and his deeds, and save me from the transgressive-disbelieving people.] -Tahreem 66/11}

If any Muslim servant (of Allaah) prays for the sake of Allaah twelve rak’ahs (of Sun’an) every day, over and above the obligatory ones, Allaah will build for him a house in Paradise, or a house will be built for him in Paradise; and I have not abandoned to observe them in after (hearing it from the Messenger of Allaah). (So said also ‘Amr and Nu’man.) (Muslim Book #004, Hadith #1581)

The 12 sunnah rakaat are as follows: –

2 before the Fajr Prayer; –

4 rakaat before and 2 after the Dhuhr Prayer;

and – 2 after the Isha Prayer.

Therefore, I never miss them. I pray the fard and sunnah prayers everyday Alhamdulillah.

One day, Sarah’s father, Mr Asim, came to pick her up from school. When Sarah saw me, she complained to him about me. Hearing this, Sarah’s father asked about my father. I told him that he had passed away a long time ago and that my mother took care of me. Mr. Asim felt sad at this news and when he found out that Sarah had been making fun of me for having no shoes, he made his daughter apologize to me for her bad behaviour. The next day when she came into school, Sarah started to treat me well and invited me to lunch at her house that Sunday. This was the first time I ever had had lunch in my life. She also gave me a gift: a wonderful pair of shoes. From that day, Sarah and I became the best of friends and Alhamdulillah Allah took care of me. I told Sarah about our home in Paradise and we both made du’a to Allah Subhana Wa Ta’ala to enter us into His Jannah Insha Allah.

One response to “My palace in Jannah”