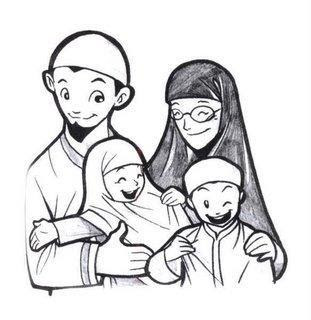 NOTE: This is not an experience. Rather, it is something from a book I have read and decided to share. This book can also be read online at Discover-Islam.net

Islam is a complete way of life. It considers the family the cornerstone of Islamic society. It bases the atmosphere in the family on sacrifice, love, loyalty, and obedience. When we say “family” we mean the traditional definition of it, namely husband, wife and children. Grandparents are also part of the extended Muslim family.

It may be asked here: how does Islam organize family relationships? To answer this, we have to concentrate on husband-wife relationship and parent-children relationship.

As for husband wife relationship the following verse portrays the right Islamic atmosphere:
“And among His Signs is this: He created for you spouses from yourselves, that you might find rest in them, and He ordained between you affection and mercy.” (Qur’an, 30-21) .

The Prophet of Islam, Muhammad (Peace Be Upon Him) also stressed these meanings when he said: (The best among you are those who are best to their families and I am the best of you to my family). He once exclaimed: (It is only the evil one who abuses them (women) and the honoured one is he who honours them). Once a man came to the Prophet (P.B.U.H.) and asked: who is the person who is most worthy of my good companionship? The Prophet answered, “your mother, your mother, your mother then your father.” That is why Islam made Paradise under the feet of mothers according to one tradition of the Prophet (P.B.U.H.).

If we contemplate the Noble Qur’an, we find that it refers to parents-children relationships in four main places. Before it asks children to be good and loyal to their parents, it requires parents to be extremely careful in upbringing their children. In other words it asks parents to do their duty before asking for their rights.

Let us contemplate the following verses of the Noble Qur’an: In the chapter called Luqman (No.31) Allah says:
“And surely We gave Luqman wisdom saying: Give thanks unto Allah; for whosoever gives thanks, he gives thanks for (the good of) his soul. And whoever disbelieves, Allah is All-Independent, Worthy of Praise. And (remember) when Luqman said to his son while he was exhorting him: “O my dear son! Ascribe no partners unto Allah. Lo! To ascribe partners (unto Him) is a tremendous wrong indeed. And we have enjoined upon man to be careful of his parents- His mother bears him in weakness upon weakness, and his weaning is in two years, so give thanks to Me and to your parents. Unto Me is the final destination. But if they strive with you to make you ascribe to Me as partner that of which you have no knowledge, then obey them not, but deal with them nicely in the world, and follow the path of him who repents to Me. Then unto Me will be your return, and I shall tell you of what you used to do.”

The Noble Qur’an then continues:

“O my son! Lo! Though it be but the weight of a grain of mustard-seed, and though it be in a rock, or in the heavens or in the earth, Allah will bring it forth. For Allah is Subtle, Well-Aware. O my son! Establish prayer, enjoin goodness, forbid iniquity and bear with patience whatever may befall you. For that is the steadfast heart of things. Turn not your cheek in scorn towards people, nor walk on the earth with pretenses, for Allah loves not each braggart boaster. Be modest in your bearing and subdue your voice for Lo! The harshest of all voices is the voice of the ass.” (Qur’an, 31: 12-19 ) .

These verses provide Muslim parents with the way they should bring up their children, unless they do so, they can expect rebellion and hatred from them; but the devoted parents have full right to what the following verses from chapter 17 enjoin. In this chapter called the Night Journey Allah says:
“Your Lord has decreed that you worship non but Him, and that (you show) kindness to parents. Should one or both of them attain old age with you, Say not ‘Fie’ unto them nor repulse them, but speak unto them a gracious word. And lower unto them the wing of submission through mercy and say: My Lord! Have mercy on them both as they did care for me when I was little. Your Lord is best aware of what is in your inner-selves. If you are righteous, then Lo! He was ever Forgiving unto those who turn (unto Him).” (Qur’an, 17: 23-25 ) .

These are the two main chapters of the Noble Qur’an that decide and clearly depict the Islamic relationship between parents and their children. It is a relationship based, as we see, on belief in Allah , and feeling that He observes all what we do and that we are accountable to Him even in the bad breath that we may release against our parents when we are angry. Even this has to be controlled.

Let us remember, however, that it is only parents who do their duty, who deserve this honorable treatment of their children. That is why when a parent came to the Prophet (P.B.U.H.) and complained to him about the ingratitude of his son, the son said: He was ungrateful to me O Messenger of Allah, before I showed ingratitude to him. So the Prophet( P.B.U.H.) did not blame the son but disliked the attitude of his parent. This is a message to all parents.

The third place in the Noble Qur’an that refers to parents-children relationship is in chapter 46 called Al Ahqaf where Allah says:
“And We have enjoined on man to be dutiful and kind toward his parents. His mother bears him with hardship and delivers him with hardship. His bearing and weaning are thirty months, till when he attains full strength and reaches forty years, he says: ‘My Lord! Arouse me that I may give thanks for the favour wherewith you have favoured me and my parents, and I may do right acceptable unto you. And be gracious unto me concerning my seed. I have turned unto you repentant and Lo! I am one of the Muslims.”

Concerning this type of child the Noble Qur’an has the following comment: “Those are they from whom We accept the best of what they do, and We overlook their evil deeds among the dwellers of Paradise – a promise of truth, which they have been promised (in the world).”

The Noble Qur’an then turns to the other category of children who are disbelievers and are, as a result, ungrateful to their parents. It declares:
“As for him who said to his parents: Fie upon you both! Do you threaten me that I shall be brought forth (again) when generations before me have passed away! While they too cry unto Allah for help and say: Woe unto you! Believe! Verily, the promise of Allah is true. But he says: This is nothing but fables of the ancient.”

Commenting on this attitude Allah says:
“Such are those whom the Word concerning nations of the Jinn and mankind which have passed away before them has effect. Verily, they are the losers. And for each there will be degrees due to what they did; that He may recompense them in full for their deeds! And they will not be wronged.”. (Qur’an, 46: 15-19 ) .

The forth and last place in the Noble Qur’an that refers to parents-children relationship is what is mentioned briefly in chapter 29 that says:
“We have enjoined on man to be good and dutiful to his parents. But should they strive to make you join with Me that of which you have no knowledge, then obey them not. Unto Me is your return and I shall tell you what you used to do.” (Qur’an, 29:8 ) .

This verse refers mainly to the unbelieving parents who still have the rights of obedience on their Muslim children unless they ask them to rebel against Allah. In this case they should not be obeyed, but doing good to them should continue regardless of the difference of religion.

In conclusion, since the family is the corner stone of society, happiness and prosperity will only be achieved if parents as well as children are committed to the guidance of the Noble Qur’an, the only guidance proved to be successful.

For in that case all will fulfill their duties and rights in the most satisfactory manner as we have seen earlier.

One response to “Family relationships in Islam”